If We Can Grow Our Economy With Fewer Carbon Emissions, We Can Grow it With Less Driving, Too

More people are driving—let's all celebrate!! And/or let's build even more roads to encourage more people to join us in our miserable commute!!!

For the second year in a row the Federal Highway Administration is celebrating the fact that Americans are driving more. They've been using the increase in vehicle-miles traveled to make the case that we need to invest more in our nation's highways, apparently accepting as a given that more driving means more economic activity. Here's Secretary of Transportation Anthony Foxx from last year's announcement:

"More people driving means our economy is picking up speed ... It also means we need to increase our investment in transportation to meet this demand, which is why Congress needs to pass the President's four-year, $302 billion GROW AMERICA Act."

Putting aside the fallacy that more investment in roads will do anything to significantly improve the flow of traffic or reduce travel times—the last $400 billion we spent didn't seem to do us much good—the real error here is in assuming that more driving means a stronger economy, and, worse, that growth is actually dependent upon increasing VMT. We don't see that kind of thinking from the Obama administration when it comes to the connection between GDP growth and carbon emissions; I would challenge the White House and our elected leaders to apply to transportation the same vision and zeal with which they've approached climate change.
ECONOMIC GROWTH AND CARBON EMISSIONS: "DECOUPLING"
Historically it's been believed that economic growth could only occur alongside increasing carbon emissions, and the actual experience of most countries had borne that out.

More recently, though, we've learned that the link between economic growth and emissions isn't as ironclad as it once seemed. Plenty of countries have managed to get richer at the same time they've reduced their carbon footprint, a process known as "decoupling": Sweden, for example, decoupled its growth from emissions way back in the mid-1990s, so this isn't exactly a cutting-edge concept. Economy/Emissions decoupling appears to have manifested at the global level, too, with a recent report from the International Energy Agency finding that carbon emissions held steady from 2013 to 2014 while the global economy grew by 3 percent. 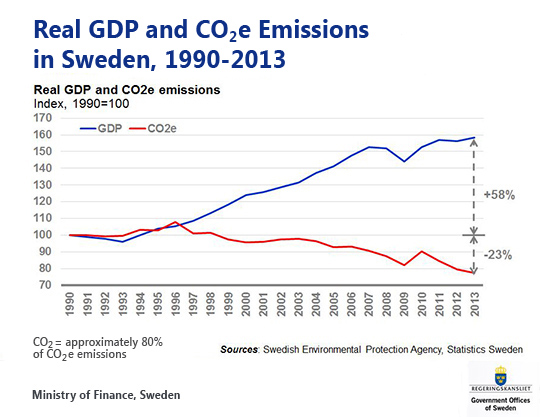 None of this is news to the Obama administration. The White House noted in its 2013 Climate Action Plan that "in 2012, U.S. carbon emissions fell to the lowest level in two decades even as the economy continued to grow." The recognition that we can reduce carbon emissions and still grow the economy is a key selling point for the president, essential for generating support for regulations that seek to shut down coal-fired power plants and promote renewable energy investments.
All of which begs the question, shouldn't we be able to achieve a similar decoupling of economic growth and vehicle-miles traveled? Better yet, according to the data, haven't we already done so?

Consider the following graph, which shows changes to real GDP and vehicle-miles traveled over the past 45 years:

Note that up until the late 1990s GDP growth and VMT tracked one another very closely. Then, all of a sudden, they didn't: Since the mid-2000s in particular, we've seen virtually no increase in vehicle-miles traveled (and a reduction in per capita VMT), while GDP climbed well above its pre-recession peak.

The next graph compares GDP to VMT, subtracting annual growth (%) of VMT from GDP for each year since 1970. (For example, in 1992 U.S. GDP grew by 3.5 percent and VMT grew by a little over 2.5 percent, so the difference is right around 1 percent—that is, GDP grew by 1 percent more than VMT in that year.) This helps illustrate the connection between the two measures, and over the past 45 years it shows a pretty clear trend toward economic growth being less and less dependent on driving.
There's significant variability from year to year, but while in the past it was common for VMT growth to exceed GDP growth (i.e., the difference between the two falls into negative territory in the above graph), it's happening with much less frequency today. Not only has GDP been growing faster than vehicle miles in recent years, the average difference between the two has also grown. The decoupling of economic growth and driving became painfully apparent immediately before and in the years since the Great Recession, but what this data shows is that this disconnect has been progressing, albeit slowly, for decades.
Looking back even further, using data from the Highway Administration and Bureau of Economic Analysis, the difference between recent years and earlier generations becomes even clearer: 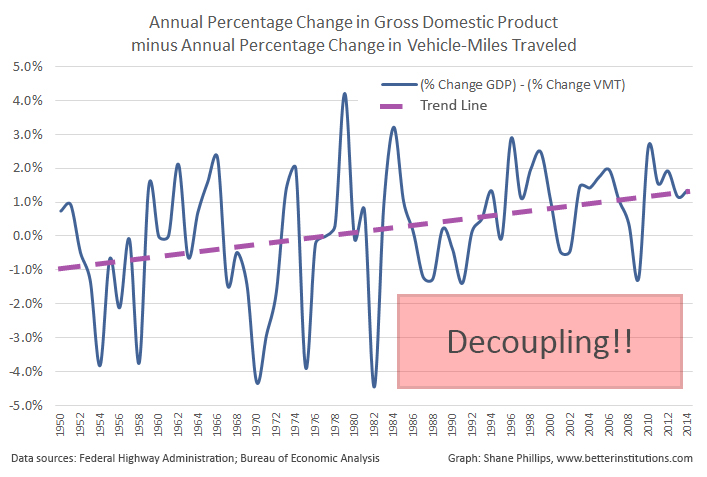 COMMITTING TO A "DECOUPLED" FUTURE

If the past several decades have taught us anything, it's that just because things worked one way for a long time doesn't mean they'll work that way forever. Increasing productivity used to mean growing wages, and that's no longer the case—at least for now. On the more positive side, technological and societal changes mean that economic growth is no longer as dependent on pumping carbon into the atmosphere and spending more and more time sitting behind the wheels of our cars.

Unfortunately, while our elected and appointed leaders are decrying the disconnect between productivity and wages, and celebrating the decoupling of economic growth and carbon emissions, most have yet to accept the fundamental shift in the role of transportation in our lives and in our economy. Organizations like the Federal Highway Administration are still married to an outmoded view that more roads mean more driving, and more driving means a stronger economy. They're right about the first part, at least.

We need them to understand that the world they knew is gone. That it's entirely possible to build a more robust economy without doubling down on additional road investments—road investments that so often fail to recognize the moral, social, environmental, and economic value of less car-dependent, human-scale cities and towns. The economic justification that "more roads equals more growth" is no longer tenable because it's no longer true, and transportation departments at every level of government need to come to terms with that new reality and adjust their priorities accordingly.