Scientists say the grime which clings to urban surfaces "breathes out" nitrogen gases when hit by sunlight. 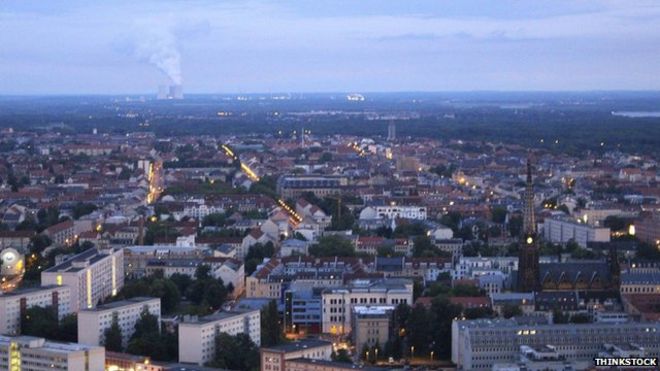 Field experiments were done in the German city of Leipzig

The dark muck was known to absorb such gases from the air, but it appears the nitrogen does not stay locked away.

In rooftop experiments in Germany, the researchers tracked the content of grime in both sunshine and shade.

The findings, presented at a conference of the American Chemical Society in Boston, were welcomed by pollution experts - and may explain a "missing" source of smog-producing gas in the skies of London.

Grime and the city

"Rather than being a permanent sink for nitrogen oxide gases... grime exposed to sunlight can re-release some of these gases back into the urban atmosphere," said James Donaldson, a chemistry professor at the University of Toronto in Canada who led the research.

Some of Prof Donaldson's previous work had already shown that in a laboratory, artificial sunlight can strip the nitrogen component from grime - which is essentially a cocktail of chemicals belched into city air by exhaust pipes and chimneys.

In the latest experiments he worked with colleagues in Leipzig, Germany, to shift the work outside.

On a tower above the city they set up two large shelves filled with beads of window glass.

Both sets of beads received the same air flow - and got thoroughly grimy - but only one was in the sun. 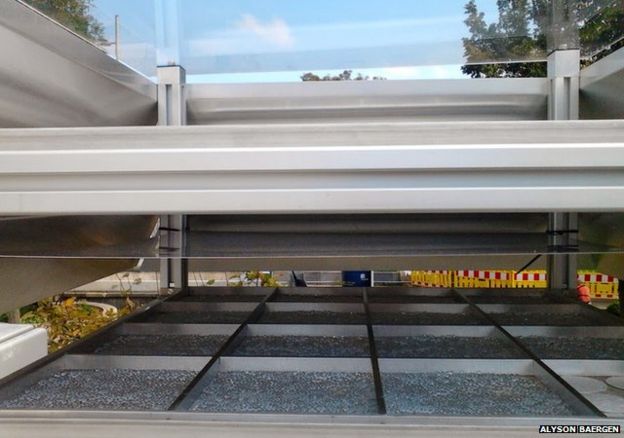 "The ones which were exposed to sunlight showed 10% less nitrate than the ones which were shaded, suggesting that there is a photochemical loss [of nitrogen] consistent with what we saw in the lab," Prof Donaldson told journalists at the conference.

That 10% drop may seem like a small effect, but it reflects a "steady state" difference: as the sunshine eats away at the grime's nitrogen content, fresh nitrogen-rich grime is constantly being deposited.

"In our lab experiments, what we did was take a full bathtub and pull out the plug," Prof Donaldson explained. "In the field experiment, we opened the plug but left the water running."

Back in Toronto, he and his team measured exactly where the nitrogen goes when grime is exposed to sunlight. Two gases emerged, and neither of them were good news.

"What we have seen in the lab is that [what comes out] is likely a combination of nitrogen dioxide (NO2) and nitrous acid (HONO or HNO2)," Prof Donaldson told the BBC.

This is important because while NO2 is toxic, HONO can drive the production of ozone - the gas which causes photochemical smog in cities.

Dr James Lee, from the Wolfson Atmospheric Chemistry Laboratory at the University of York, said this production of HONO was the most significant aspect of the findings.

"The amount of nitrogen oxides (NOx) given off by exhausts in the centre of a city will probably be much higher than what grime can take up and then give back off again," he explained.

"But if some of it is transformed into HONO, then that really is important."

Why? In part, because it might explain a puzzling gap in Dr Lee's own observations of polluted London air.

"If you put into a model all the known sources of HONO, from my work in London there's about 30% missing compared to the quantity of HONO that you can measure directly," he explained, adding that this missing source is "very significant" for predicting ozone quantities - which the Met Office does as part of air quality forecasts. 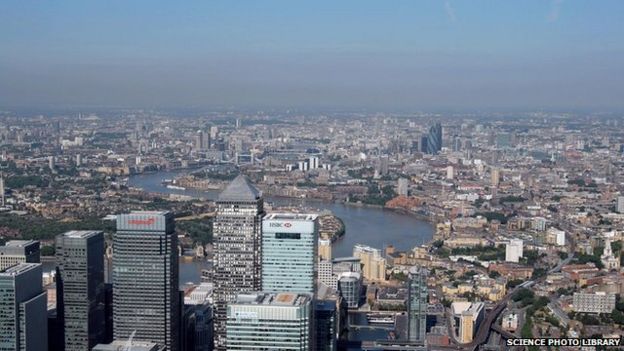 Simon Birkett, of the campaign group Clean Air in London, described the study as "a really worthwhile piece of research", noting that the sheer quantity of grime in London could make it "a big potential source of pollution".

Mr Birkett pointed out that NO2 and ozone are the two gases that are currently regulated for health purposes.

"If grime is contributing, then we need scientists to tell us how much [gas] is coming off and what health effects it has."