Atmospheric levels of a little known by-product from diesel engines are up 70 times higher than expected according to a study.

These hydrocarbons are a key component of two of the worst air pollutants, ozone and particulate matter.

The authors believe these "hidden" emissions are having a large impact on air quality in cities like London.

The exhaust pipes of diesel-fuelled trucks and cars produce an array of emissions that have different impacts on the air that people breathe.

The nitrogen dioxide and particles that are emitted from burning diesel have a direct impact on human health in cities.

But diesel also contains more complex, long-chain hydrocarbons, whose role in air pollution has been little understood until now.

They can form dangerous air pollutants, especially ozone and particulate matter, which are emitted into the air as unburned fuel or diesel vapour.

Researchers from the University of York have been able to detect these complicated compounds in the London air, using sophisticated measuring technology.

"What we found is that there's actually a lot of this unburned material from diesel that we haven't seen before."

"That might be having a bigger impact on ozone and particle formation than petrol cars are, and historically no one has looked at these emissions at all."

The researchers found that close to 50% of the ozone production potential in London in winter was due to these diesel elements. In summertime, it was around 25%.

The authors believe that these hydrocarbons are having a direct effect on health.

"I think it is having a large impact on air quality in our cities, the number of deaths associated with particle pollution are much higher than those from nitrogen dioxide, this is a route to increase particle pollution so it could have a major impact on human health."

The study also found that the scale of these hydrocarbons in the air was far in excess of the levels expected by government, which are based on data from car manufacturers' emissions tests. 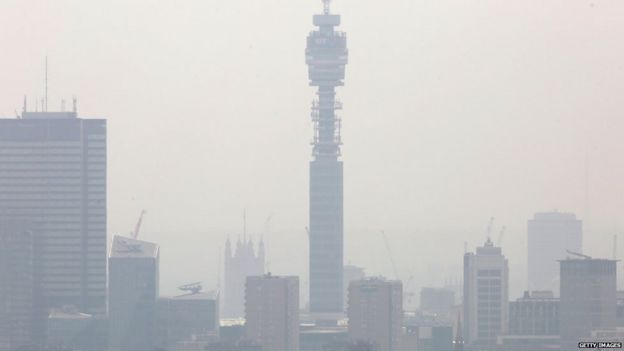 For some types of these diesel emissions, the real world samples were over 70 times greater during winter compared to the regulatory inventories.

The authors say these emissions are "massively under-predicted" but they are uncertain if this is a deliberate attempt by car manufacturers to conceal the scale of the problem or simply an omission through ignorance.

"Volkswagen have admitted they have deliberately turned off the emissions controls, and if these controls lower emissions of hydrocarbons, if you just turn that off, you are definitely gaming the system," said Dr Hamilton.

"If you look in the real atmosphere, compared to the test data, there's a lot of NOx and a lot of these hydrocarbons as well."

Other researchers praised the study as a step forward in scientific understanding.

"It is science that has come up with this discovery, but it definitely has public policy implications," said Prof Paul Monks, from the University of Leicester, who is also the chair of the UK government's air quality expert group.

"It raises yet another question about diesel vehicles. They are implicated heavily in NO2, they are implicated in toxic particulate matter, and this points to another deleterious environmental impact from diesels."

The authors are calling for a review of the way emissions from car and trucks are measured, with much more emphasis on real world testing and increased testing for a wider spectrum of substances coming out of the tail pipe.

"We have a policy in the UK to look at these sorts of hydrocarbons from petrol cars, but we really have to start thinking more seriously about measuring these from diesel cars."

The research has been published in the journal Atmospheric Chemistry and Physics.