Why We Say 'Car Accident,' and Why We Need to Stop

The term suggests fatal crashes are inevitable and beyond our control—they're not.

Once you start looking for them, you see the headlines everywhere. The ones about the seemingly autonomous killer cars: “Woman dies from injuries after car jumps curb,” or “Out of control car pins woman against produce stand,” or “Car barrels onto sidewalk in Brooklyn, mowing down boy.” It’s as if no one were driving.

Every day in the United States, some 90 people diewhen routine car trips turn deadly. Thousands more are injured. Lately, traffic-safety advocates have been pushing to get reporters and others to use different language to describe these all-too-common events. Pushing editors to rethink sentences that lack human agency—like this one, about a fatal car crash caused by a driver going to the wrong way:

During the process of the accident, a 42-year-old man, Lonzell Davis, who was walking in the area was killed.

Writers at publications from Treehugger to The Washington Post have highlighted the issue. Many publications and individual members of the press, including myself, have become more mindful of the way we write about traffic deaths and injuries, using language that acknowledges the role of the driver and moving away from the word “accident,” with its fatalistic implications.

In New York, in particular, Families for Safe Streets has launched a campaign to get people to say “crash” instead of “accident.” They want to emphasize that many, if not most, traffic fatalities are preventable—not inevitable occurrences. We don’t talk about “plane accidents,” they point out. We assume that when a plane crashes, there was some identifiable human or mechanical error, something that could have gone differently. We want to figure it out and name the cause and avoid a recurrence.

Why not look at car crashes the same way?

Why do we use phrases that shift accountability away from the human beings involved, describing “out of control” vehicles that “jump curbs” and “plow into pedestrians” seemingly of their own accord?

Why do so many stories about traffic deaths omit any mention of a human behind the wheel?

Why do we so often say “the pedestrian was hit and killed by the car” rather than always saying “the driver killed the pedestrian”? 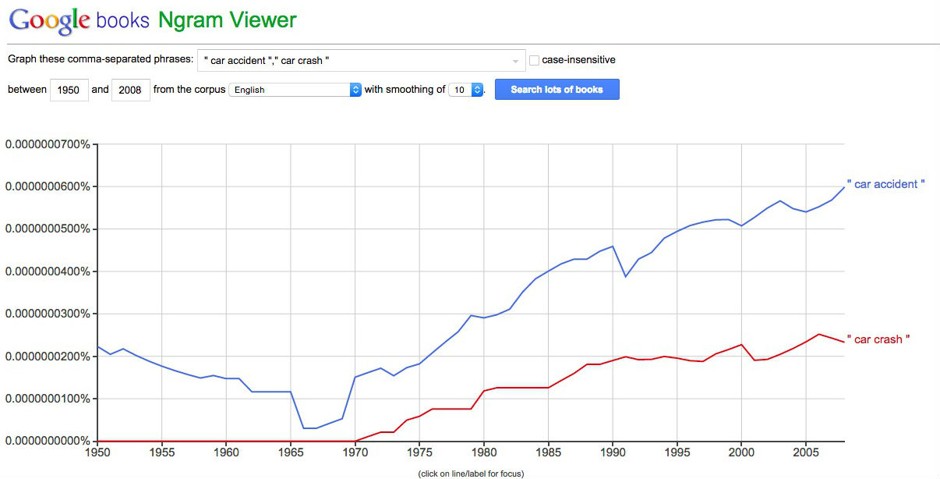 If you can make eye contact with the human being inside that metal shell—as you sometimes do, for instance, when you are most vulnerable, crossing in front of a driver in a crosswalk—you know instinctively that you have a better chance of surviving the encounter. If you can connect through the metal and glass with the primate brain that is behind the wheel, you can appeal to it on primate terms. Sometimes, that’s enough to save your life.

So often, though, when drivers pilot their vehicles along the street, they move at an inhuman speed. Any possibility of contact or communion on an animal level is gone. When “the car jumps the curb,” it feels to the people on the sidewalk much the same way it might if a meteor fell on them. The traumatized driver who emerges from the machine after such a wreck can seem almost pathetic, a victim of circumstance rather than an agent of destruction. It’s easy to see why people feel that the car itself has done this deed, rather than the person driving it.

We know that means we could be killers, too.

And that begins to get to what I think is the deeper, more insidious root of our preferred terminology here. I think we routinely use language to distance ourselves from the idea that drivers in fatal crashes are killers, because we know that means we could be killers, too. We’re protecting ourselves from the brutal reality that all too quickly, we ourselves could be the ones making an error in judgment, losing control, and destroying people’s lives.

We all experience the near miss

Most people in the United States are compelled by the design of the places where they live to drive nearly everywhere. They are locked into a system where the car is a required tool for fully enfranchised citizenship—the only sensible and convenient way to get to work, to the store, to the doctor’s office, to school.

Anyone who has driven more than a few thousand miles in his or her lifetime has had the unnerving experience of a near miss. Get going fast enough, which is precisely what cars enable you to do, and even a momentary lapse of attention can have you drifting onto the shoulder, or making an unsafe turn. Drive hour after hour, day after day, year after year, and the potential for error mounts. 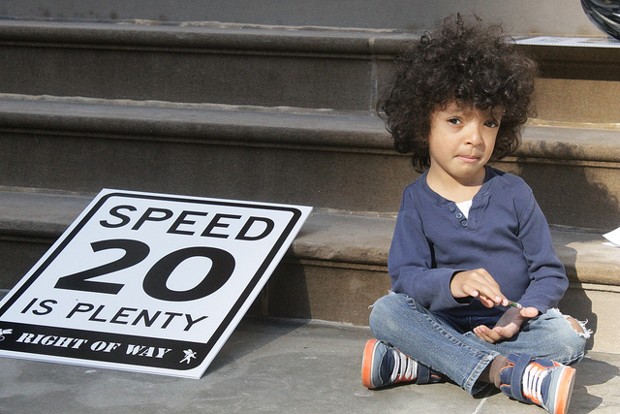 On some level, we all know that driving is a dangerous activity, probably the most dangerous thing that the average person does in a lifetime. We know that every time we turn the key in the ignition, we are powering up a machine that gives us a stupendous and potentially deadly power. But most of us are in no position to choose another mode of transportation. Most of us must accept the responsibility of piloting that machine as the baseline price of admission to America.

Changing the language is key

Thinking about the potential for a bad outcome every time you get behind the wheel simply isn’t possible. We have to find a way to put those thoughts aside in order to function. Words like “accident” help.

I still believe that changing the language we use to talk about traffic violence is vital and necessary, especially for members of the media. I think it is one part of an important shift away from the windshield perspective that has dominated the last century of planning and managing American communities. I do believe that language shapes our thinking.

But the problem is much deeper than language. The words we use, on some level, simply describe the world we live in. It’s a world in which we’ve surrendered to cars as the primary way to move our fragile bodies around. Accidents will happen.