Will we ever get a truly car-free city?

Oslo is the latest city to announce plans which shift the focus away from cars – by banning all private vehicles from the centre by 2019. Car-free days have slashed pollution in Paris while new eco-cities are aiming to design out the need for vehicles – but will cars in cities ever be consigned to history?

When Oslo revealed plans to ban all private vehicles from the centre by 2019, it joined a lengthening list of cities seeking to shift the focus away from cars and towards greener, citizen-focused mobility solutions.

Around 7 million people globally are estimated to die from air pollution every year, not to mention the millions more killed in accidents involving motor vehicles.

In response, cities around the world are trying out car-free initiatives. Helsinki has ambitious plans to make its “mobility on demand” service so good that nobody will want to drive a car in the centre by 2025, while Paris’s car-free days have successfully reduced high pollution. New cities – such as the Great City on the outskirts of Chengdu, China, and Masdar near Abu Dhabi – plan to focus on mass transit or electric cars as alternatives to gas-guzzling private cars. But will cars in cities ever be consigned to the history books?

The Norwegian capital’s announcement came last month as part of a wider political initiative by the newly elected leftist municipal government to halve the city’s emissions by 2020. On top of implementing a no-car zone within the city’s central ring road, Oslo plans a number of other proposals, including building at least 40 miles of new bike lanes, introducing rush-hour charges (on top of existing congestion fees) and removing parking spaces. These initiatives, coupled with the city’s move to divest fossil fuels from pension funds, are all in an effort to slash emissions. The city also plans to be fossil-fuel free by 2050. 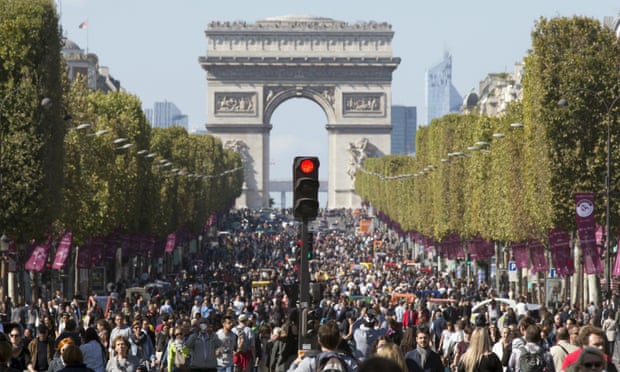 People on the Champs-Élysées in September when central Paris went car-free for a day. Photograph: Philippe Wojazer/Reuters.
It’s certainly no secret that removing gas-guzzling vehicles will work wonders. When smog levels were at a dangerous high in Paris earlier in the year, mayor Anne Hidalgo gave the red light to half of the city’s diesel vehicles. After just 24 hours, PM10 particle pollution fell back to well below 80mg per cubic metre and traffic jams were reduced by almost 40%.

France tops the European list for the highest percentage of diesel cars on the roads, thanks to government subsidies making the fuel cheaper than petrol. So, in December last year, Hidalgo vowed to implement a permanent ban on diesel-powered vehicles from the heart of the city by 2020. In tandem with this initiative, cycling and pedestrian infrastructure will be greatly improved, beginning with an €8m (£5m) walkable transformation of the River Seine’s right bank, and the doubling the cycling network to 870 miles.

Before this radical initiative comes into play, Parisians were offered a brief taste of what their city might look like in 2020 when Hidalgo rolled out a car-free day across one-third of the French capital in sunny September. Air and noise pollution was significantly reduced, and major arteries such as the Champs Élysées transformed into temporary public spaces for bikes, pedestrians and impromptu yoga sessions. Hidalgo has also confirmed plans to implement emergency traffic bans during periods of high air pollution.

Venice is often cited as the largest car-free city, but they have it easy, with canals and rivers instead of streets. Hamburg, on the other hand, is currently making waves by enforcing an auto-ban on a number of urban roads to develop a network of route for pedestrians and bikes that link parks and open spaces together. This “green network” will span 40% of the metropolis, transforming Germany’s second largest city into a more human-friendly environment, while also playing a role in absorbing CO2 and bringing the city closer to its goal of an 80% reduction in greenhouse gas emissions by 2050. 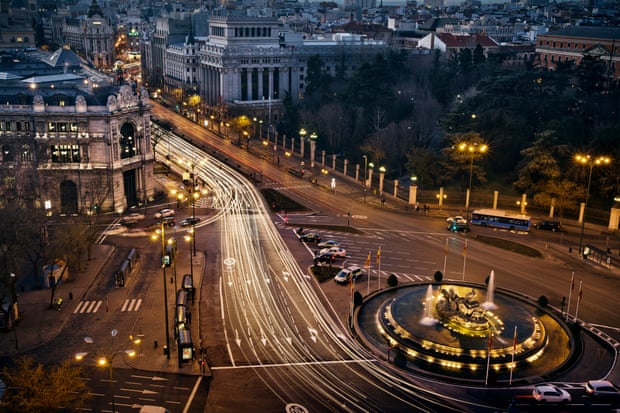 Madrid plans to pedestrianise the urban core by 2020. Photograph: Daniel Ochoa De Olza/AP. Madrid, too, is focusing on the city at a human level, and recently hatched a plan to pedestrianise the urban core and expel cars by 2020. Beginning in early 2015, the Spanish capital introduced a limit on non-residential vehicles from entering a 1.36 sq mile area of the centre, expanding on an already existing zone. To strike a balance for the city’s residents, Madrid will be enlarging its bus network and building new pedestrian infrastructure, and it has already launched Europe’s first fully electric e-bike scheme. To top this off, the city recently announced plans similar to those in Paris, to ban 50% of cars when air quality levels were breached – free public transit will be provided on those days.
Madrid is expanding its bus network and has launched Europe’s first fully electric bike share

Dublin and Brussels are also toying with the idea of kicking the habit through city centre diesel-car bans, with similar ideas proposed by Liberal Democrats in London following the VW emissions scandal. Milan is offering public transit tokens to residents for every weekday they surrender their cars, and Rome is slowly progressing with parking bans. But there’s one European city that’s opting for an ambitious approach to render car ownership completely pointless.

Forget closing off streets to cars; Helsinki is going all out on a plan to provide its citizens “mobility on demand” by 2025, by fusing together access to carpools, buses, taxis, bikes and ferries through one smartphone app. The software would function both as a payment platform and journey planner, equipping residents with an advanced array of cheap and convenient travel options that, as Adam Greenfield reported, “would be so good that nobody would have any reason to own a car”.

And then there’s bike-friendly Copenhagen. Unsurprisingly, large swathes of the Danish capital have been closed to vehicles for decades, with bicycle infrastructure reaching into every corner. Pushing to become carbon neutral by 2025, Copenhagen will continue to prioritise bikes over cars through a series of 26 suburban commuter arteries known as “cycling superhighways”. However, car ownership in the city is currently on the rise, and Copenhagen’s lord mayor, Frank Jensen, is increasing the number of parking spaces, much to the discontent of some vocal residents. “I don’t want to say to Copenhageners that ‘I don’t like your lifestyle because you’re buying a car’,” says Jensen. “Our ambition is to have one third of trips made by bike, one third by transit and one third by car. We are investing in a new metro system … and we’re improving the seamless transition between the three modes in order to reach that goal.” 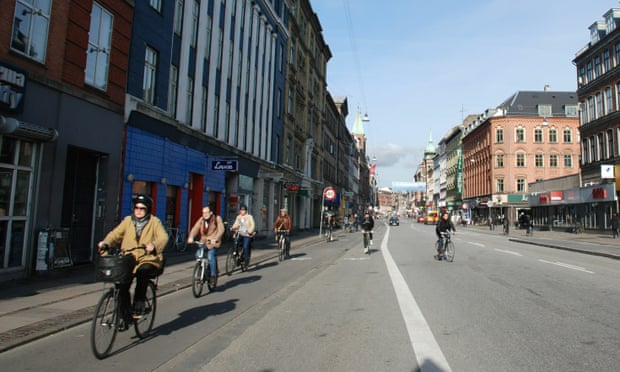 Paris, Helsinki and now Oslo – European car-free efforts have really held the limelight in recent years. But in Latin America, there’s one city that’s been championing the idea of car-free streets since 1974. And that’s Bogotá.

Every week in the Colombian capital, over 75 miles of urban roads are shut to vehicles. The routine event – Ciclovía – began in 1974, and has aided the city’s transformation into a cycling paradise. Thanks to ex-mayor Enrique Peñalosa’s commitment to creating a healthy, car-free city, a network of over 200 miles of bike-only lanes serves Bogotá. For Peñalosa, “a citizen on a $30 bicycle is equally important to one in a $30,000 car”. After leaving office in 2001, he was elected as mayor once again this weekend.

In Hyderabad’s IT corridor (dubbed “Cyberabad”), a recently launched weekly car ban marks a first for Indian cities. And in South Korea, a Suwon neighbourhood recently trialled a full month ban in September 2013, which inspired the wealthy Sandton area of Johannesburg to hosts its own car-free experiment last month.

Every week in the Colombian capital, Bogotá, more than 75 miles of urban roads are shut to vehicles

But during the dawn of the automobile age, when cities were designed around the beloved family motor, it takes a lot of effort to make a U-turn. The average US commuter spends around 42 hours a year stuck in a traffic jam (or double that, if you live in LA), but Portland hopes to change this by having 25% of trips made on two wheels by 2030. The city also opened a pedestrian, bike and public transit-only bridge across the River.

While the rest of the country was building cities where the car is king, Davis, the largest city in Yolo County, California, adopted a carefree, car-free attitude when it came to urban infrastructure. While modal share for cycling just scrapes an average of 2% in the US, in Davis it’s 20%.

Over to Canada, where Toronto’s commuter congestion costs the city C$6bn (£2.9 bn) annually. Alongside the expansion of the subway system, segregated bike lanes are slowly creeping into North America’s fifth largest city, and there are whispers around a potential car-free street during rush hour. This is certainly a turnaround from the city’s direction under the leadership of former mayor Rob Ford, who spent C$300,000 to remove a major bike lane (which had seen a 300% increase in cycling) in order to save car-commuters two minutes on their journey home. 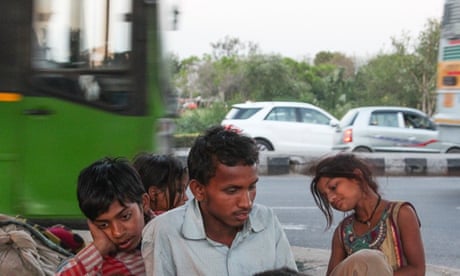 'My children are suffering but what can I do?' Delhi's polluted air, by the people who live there

A family living in the middle of an eight-lane motorway, an autorickshaw driver struggling to breathe, a young woman who can’t wait to leave ... the foul air of India’s capital affects all sections of society
Read more

Kicking the car habit in well-developed municipalities poses a challenge, but built-from-scratch cities provide urban planners with the opportunity to start completely afresh. Great City, a development on the outskirts of Chengdu, China will be constructed from scratch with space for 80,000 residents – none of whom will need a car to get around thanks to a mass-transit system rendering cars nearly useless. Home to some of the world’s most polluted cities, China’s newest conurbation will generate 60% less CO2 than a more conventional city of a similar size. Masdar, an eco-city rising from the desert near Abu Dhabi will also keep non-electric (and driverless) cars out of the centre, encouraging walking and cycling instead.

Across the globe, it’s estimated that around 7 million annual deaths are linked to air pollution exposure, not to mention the millions more killed in accidents relating to cars each year. The European commission has already unveiled desires for a “single transport area” in 2011 with a primary focus on eliminating “conventionally fuelled” cars in cities, geared towards a 60% cut in CO2 emissions by 2050.

With so many car-free measures taking shape across the globe – from heavily polluted Hyderabad to green, utopian Copenhagen – city leaders are waking up to the importance of planning places for citizens that both aid sustainable urban development, while also improving quality of life. In a few weeks, world leaders will assemble in Paris for what’s set to be the world’s biggest climate conference yet, seeking to come to an international agreement on measures to keep global warming below 2C. Will car-free cities be high on the agenda?